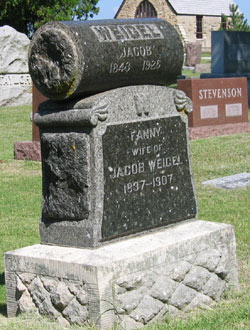 Names on tombstones indicate that many people were named for heroes: Bible, Greek, Roman, explorers, presidents, Civil War, literature, family and outlaws. In our modern era when heroes were hard to come by, people turned to naming their children for soap opera stars and sports heroes.

It was common for a male child to be named for his father. If that namesake died, the next male child born would be given the same name in hopes that the family name would continue. In this cemetery, there are instances when three children bore the Christian name of the father.

In early days, Sterling many infants did not survive the rigors of birth without modern medicine and proper nutrition. Life on the prairie was harsh at best. A story is recorded that a young man came to Peace to live a year on his claim. He then went back east to find a bride to share his life. He was successful in his search, married and brought to Peace with him a twelve-year-old bride. She died in childbirth after four years of marriage but according to the story, She served him well. Many men married more than once as their wives died in childbirth and succumbed to the hard life of the prairie. It was not uncommon for there to be ten or more children in a family and the early cemetery lots had twelve plots. Many of these held the bodies of young children and mothers. Infants often were not given names until they had lived six months ï¿½ a point at which survival seemed more likely. 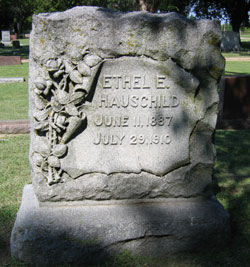 As one reads through the cemetery, one finds: 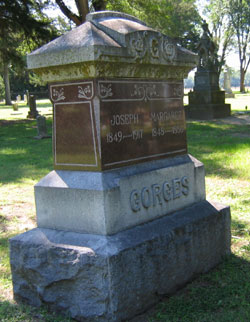 Of the famous or relatives of the famous buried in the Sterling Community Cemetery there are:
– James Mathews, nephew of the great English actor C. Mathews
A number of Civil War officers and doctors including:
– Nathan H. Ray, who at thirteen years of age was a drummer boy in the Civil War
– Frank Shelby Blades, one of General Custer’s men
– Warren Pierce Morrison, whose paternal grandmother was a sister of Robert E. Lee
– Samuel Harvey Kurnes, a Buffalo soldier

– Children of George Avery, Jr., founder of Avery farm equipment
– Mattie E. (Sharpe) Hadlock, the first woman in the town of Peace
– Genie Stubbs, the first cemetery burial (1873) in the town of Peace
– Jan Walker, mother of Demira Azula (Walker) Fair (the first burial, 1876, after the cemetery became known as Cottonwood Park Cemetery)
– John S. Rider, a riverboat captain on the Ohio River
– Children who were part of the Orphan train and couples who adopted them
– Widows whose husbands went to California in the Gold Rush and were never heard from again
– Parents of Charles August Babize, French press agent for Dr. Charles Sheldon, author of What Would Jesus Do?
– Arthur Dyche, son of Lewis Lindsay Dyche, for whom Kansas University’s Dyche Museum was named
–  Kenneth Porter, noted Kansas poet and writer
– William Arthur Bright, world champion Bantamweight boxer
– Hester (Gilpin) Carr, a first cousin of the movie star and bathing beauty, Esther Williams
– John S. Dillon, founder of the Dillon Grocery stores (the first of which was in Sterling)
– Dr. Francis Marion Spencer, first president of Cooper (Sterling) College.

Samuel S. Dix,  Peek-a-Boo –  Citation by Kansas Governor Hoch “In a hundred newspaper offices across the state, the news of the death of Peek-a-Boo of Sterling, brings a feeling of personal loss. For many years he has been editing a department in the Sterling Bulletin and it has been one of the very best departments conducted in any paper in Kansas. While largely local in character it was interspersed with a quaint and wholesome philosophy of life and with a comment on the every day things that happened in a country town that was always readable, original and refreshing.” Re: THE STERLING KANSAS BULLETIN, 17 Sept. 1909.

–Jane Smisor Bastien – A passionate piano teacher, Jane made a difference in countless lives with her composing, writing and performing. Jane and her husband James (Jim) Bastien wrote best-selling piano methods, culminating in the Bastien Piano Basics, enjoyed by millions of students and teachers worldwide. With more than 500 publications to their credit, and books translated into 16 languages, Jane and Jim made the Bastien name synonymous with innovative piano pedagogy.

Each family has heroes. Although the grave marker might give only brief facts, behind each marker is a life story to be passed on to future generations.