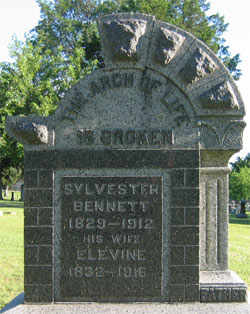 William Quincy Elliott, born in Wayne County, Indiana, February 19, 1837, was educated in the Friends Monthly Meeting School at West Grove, Indiana. When twenty years of age, he married a daughter of the wealthiest farmer in the Indiana community. As a very successful 36-year-old farmer, Elliott came to Kansas in the fall of 1873. He filed a homestead claim on eighty acres of land, southeast of present day Sterling. In March 1874, Elliott came to the village of Peace, (name later changed to Sterling), and took up residence there until July 1, 1875. For family burials and that of members of the Friends Monthly Meeting, Elliott, a Quaker, set aside some of his ground. This area is now within the older part of the cemetery. North of this specific section (Friends Cemetery), other individuals who died in the village of Peace were buried. Elliotts interest in a cemetery seems to have sprung from the death in Peace of his two-year-old son, Charles Sumner Elliott. The Friends Cemetery and the area beyond were personally established by W. Q. Elliott and known as the Cottonwood Park Cemetery.

These cemetery grounds were not platted. People were buried wherever families thought it a good place. Sometimes the place was under a tree, sometimes removed from the road, sometimes by the road, sometimes near a grave of a friend, sometimes where a landmark would easily lead to the location of the grave. The earliest marked graves are 1855 for a Samuel Connery and an 1856 one for an E. P. McFarland. Although these are not designated as reburials, we do know that the first actual settlers, who came to this county, came in 1870 and were ranchers. It was not until 1871-1872 that actual settlements were made. A colony, mostly people from Ohio, settled on Cow Creek in 1871. In the spring of 1872 a colony was settled at Peace. The railroad was surveyed through the county in the fall of 1871 and the track was laid in July 1872. In 1877, a petition signed by nearly every citizen of Sterling requested the Mayor and Council to provide a cemetery. The matter was referred to a committee consisting of Stanton, Page and Ricksecker. Ricksecker, two years earlier in 1875, had buried two children in an area bounding the Friends Cemetery and had personal interest in the development of a community cemetery. How the matter proceeded is not clear; however, the Cottonwood Park Cemetery was platted with lots, a potter’s field, drives, walkways, trees, and gates and was registered with the County on the 24th day of October 1877. The sale and deed to William Quincy Elliott were recorded on the 27th day of November 1877. 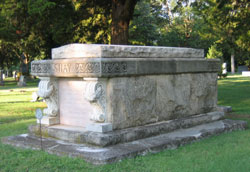 Following the filing of the plat, lots were sold. William Wilson registered the first deed for a cemetery lot in the Cottonwood Park Cemetery on December 6, 1877. This lot he purchased on October 19, 1877, from W.Q.Elliott and Rebecca Elliott for $8.00. (It is interesting to note that Rebecca is mentioned at a time when women seemed to have little identity of their own and even in burial were not designated by their given name.) Each purchaser received title to his lot. The title specified that the lot be used exclusively for the purpose of a family sepulcher. The first burial in Cottonwood Park Cemetery was Mrs. Leander (Jane) Walker, Sr., who was buried in the lot closest to the road on the south.

The Cottonwood Park Cemetery included a potter’s field, which in the late 19th century provided a place for burials of strangers, illegitimacies, criminals and suicides. The latter could not be buried in the grounds blessed by the church and ministers were not permitted to participate in any type of service provided. At present, nine cemetery markers are located in this part of the cemetery but according to record by 1908, there were 159 individuals buried in potter’s field. Also, buried in potter’s field were bodies of individuals, who could not afford a cemetery lot, those who had no surviving family, and sometimes bodies of infants who would later be reburied in a family lot.

On April 27, 1878, Elliott for the sum of one hundred twenty dollars ($120.) officially purchased the land legally described as SE 1/4 of SE 1/4, Section 16, Twp 21, S of baseline of Range 8, W of 6th principal, amounting to 40 acres. This actually encompasses the entire cemetery grounds. W. Q. Elliott fenced in five acres for his cemetery and began improving the grounds as fast as possible. Mr. Elliott set out many trees as did lot owners. 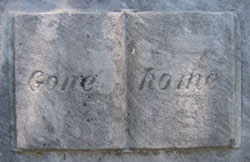 The next step in cemetery history evolved naturally with more settlers coming to Peace and bringing with them a bit of social history that of Secret Societies. Following the Civil War in the United States, people were on the move to claim new lands in the West and stake their claims to new lives. At this time secret societies, which had been a significant part of their lives, were formed in these new areas to provide fellowship and protection of members from theft, bodily harm, etc. These groups abounded in Sterling and included branches of the Anti-Horse Thief League, the Woodsmen, the Freemasons, Independent Order of Odd Fellows, etc. Although the I.O.O.F. membership was waning in the East at this time and writers euphemistically called the group, The Knights of Lost Splendor, the lodge became strong in Sterling. Many of the prominent citizens of early Sterling were active in this organization. As with most secret societies organized to give aid, assistance, and comfort to members and their families, the societies were the object of suspicion by nonmembers and religious groups. To overcome some of the suspicion and negative feelings, secret society members promoted local charitable and volunteer work. A common practice of the I.O.O.F. in many parts of the country was to establish a local cemetery, not only providing a section of burial ground for its membership and families  but also to show charity to the citizenry by providing a service, which all would need some time. In 1887, the I.O.O.F., Sterling Encampment #84, organized on June 3rd with twenty-four members. Lodge #181 membership arranged with W.Q. Elliott to buy the Cottonwood Park Cemetery. The cemetery included the Friends Cemetery and the land beyond where others had been buried. Lodge members put in walks, planted trees and tried to make additional improvements each year. The Lodge managed the Cottonwood Cemetery for several years, selling lots and providing some perpetual care. In 1907 individuals and clubs started a campaign to buy the cemetery and make it city property. The state had passed the legislation by which a second-class city could own and operate jointly, with the township, a cemetery. The ruling board would consist of the Mayor and one township trustee. This is the legislation by which the cemetery is governed today. 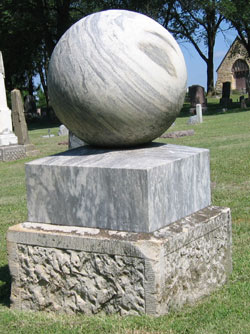 On April 24, 1908, Frank Shelby Blades, cemetery sexton, went over the cemetery, locating graves and getting the names of those buried there. He found 1331 graves: 1172 in family lots, 159 in potters field. For twenty years individuals and clubs continued to promote a change in ownership. The push to have the cemetery become city and township property was driven by the desire to have a cemetery better managed and cared for. There were numerous articles referring to the cemetery as the city of weeds and the land of sandburs.

Finally, upon vote of the people in the November 2, 1926 election the Cottonwood Park Cemetery became the joint property of the city of Sterling and Sterling Township for the selling price of $1,600. Ordinance #484, January 27, 1947, officially changed the name to the Sterling Community Cemetery; noted purchase to include all unsold lots, streets and alleys except certain lots retained by the I.O.O.F. for burial purposes.

The city put in a water system before Memorial Day 1928, making it possible for every lot owner to water his lot easily by using fifty feet or less of hose. For early settlers, coming from a culture where cemeteries were to be park-like and where family reunions and picnics were held on Memorial Day or on burial day, the Sterling Community Cemetery needed more work. As Gladstone said, Show me the way in which a nation or a community cares for its dead, and I will measure with mechanical exactness the tender sympathies of the people, their respect for the law and the land and their loyalty to high ideals.