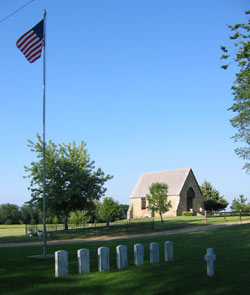 Hoar has devoted a large part of his career to the study of Civil War soldiers. Following the Civil War, soldiers were given land for the settling in the West and the point to which the railroad was developed then would have led many to this area. Notable in Hoars Youngest Soldierboys of Americas Saddest War is the story of Alonzo McMurphy, a Civil War soldier before his 14th birthday and one who played a significant part in early day Sterling. McMurphy rode his horse in many Decoration Day parades as the oldest surviving Civil War soldier in Sterling. Alonzo Luther McMurphy died when 101 years of age and along with many of his descendants is buried here.

Many of the Civil War soldiers who took up residence in Sterling were professional people and officers within their military units. These men made many contributions to the community and were fondly remembered and honored each May. Decoration Day was first observed on May 30, 1868, on the order of General John Alexander Logan for the purpose of decorating the graves of the American Civil War dead. Since 1971, Memorial Day has been observed annually on the last Monday in May in most of the United States following a newly established federal schedule of holiday observance. Confederate Memorial Day, formerly a legal holiday in many southern states, is still observed on the fourth Monday in April in Alabama, the last Monday in April in Mississippi, and April 26 in Florida and Georgia. Memorial Day is observed not only to honor the Civil War dead but all the nations armed services personnel killed in wartime. 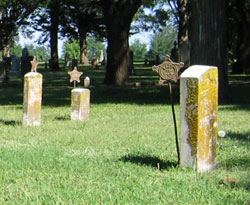 Early Decoration Days in Sterling featured the closing of businesses and a parade of all able-bodied community members. The procession moved from downtown Sterling, east on Washington to First Street, then north to the cemetery. Led by the old soldiers on horseback or in carriages, most families in the community joined in the parade. Women and children carried large bunches of wildflowers and garden flowers that were strewn on top of graves of old soldiers. The local Post of the Grand Army of the Republic (GAR) held a reception for local and visiting comrades in the early morning, followed by a drill and muster of the post. After the parade, the contingency moved to quarters large enough to accommodate all and the local Post Commander would address the group. Solos and choruses would provide musical renditions of “Vacant Chair” and “We Come, Silent Heroes” and conclude with Preller’s National Hymn. A renowned orator, often from Topeka, was brought in to give the address of the day. Special recognition was given to old soldiers who had died since the previous Decoration Day and those who remained among the living were honored for their service. A remnant of these early Decoration Day parades is the First Street sidewalk that goes north from Washington Avenue to Cleveland Avenue to the cemetery. The 1911 sidewalk was laid out of consideration for the women in long dresses and men in dark suits parading through the dirt or mud to the cemetery.

The GAR, American patriotic organization composed of Union veterans of the American Civil War, was founded in Decatur, Illinois, on April 6, 1866. It was dissolved in 1956 following the death of its last member. This group was founded for remembering and honoring dead comrades. It also provided a brotherhood for mutual assistance to members and their families. This same GAR instituted the observance of Decoration Day that influenced all Americans not only to remember veterans but all those who have died. The organization was politically influential, particularly in its support of presidential candidates between 1872 and 1904 when its membership was at its peak. The GAR was very active in Sterling. Sadly for members and historians, the original records, all regalia, books, fixtures, charters, etc. were lost in the 1880 fire, which destroyed the eastside business from Monroe Street north. Some GAR bronze markers remain visible at Civil War soldiers’ graves.