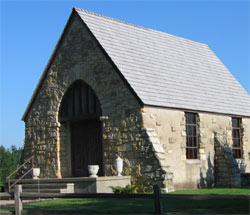 Another CWA project of which the city and community may well be proud is the new chapel that has just been completed in the northwest corner of the Sterling Community Cemetery. Built of stone and cement blocks, which were taken from around lot curbing, the Spanish style building makes a very substantial and attractive little chapel.

The material, which had to be purchased for the building, was furnished by Sterling City and Sterling Township, and the work was all done as a Civil Works Administration (CWA) project. Marion Heter was the architect and Art Bowen and Jim Nichols laid the rocks.

Cement steps lead onto a cement platform or porch, which extends across the front of the building, and a cement floor is laid inside. The ceiling is beamed, of used timber, which has been treated and made to represent an old appearance. The windows are of small panes of stained glass, and the plastered walls are of a deep cream color, rough finish.

The building has a seating capacity of one hundred people or more, and will be an ideal place to hold small funeral services, for services at the grave when the weather is bad, or for short services for funerals or persons brought here from a distance for burial.

Chapel: A Vault in the Building 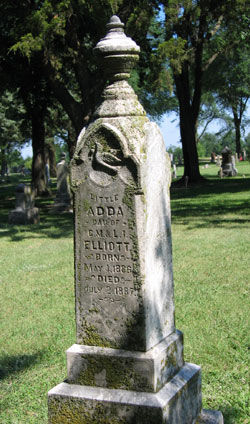 F. C. Porter donated a vault, which is installed in the north end of the building, just back of the pulpit. Here a casket can be placed, and securely locked in, and kept until such time as the family wish to have it interred. Oft times the weather is bad and it is difficult to dig a grave or it is storming during funeral services, and at such time the casket can be placed in the vault and the body can be interred later when the weather is favorable. This feature will no doubt be appreciated many times.

There is a basement under part of the building, which the sexton used for a storeroom for tools, for a garage and a workroom. A furnace will also be installed for heat.

Chapel: A Tip for the Clubs 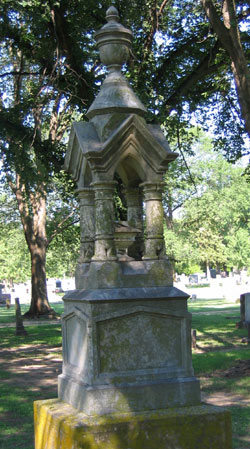 Here is an opportunity for some club, or clubs, to do something worthwhile. The interior of the building needs some furnishings to make it complete; drapes at the windows, rugs for the floors, a pulpit and a few easy chairs. No doubt there are homes, which can spare some of these things, but the result should be taken into account and not get a hit and miss collection of things.

The furnishings need not be expensive, but the rugs and drapes should be a warm color that would soften the effect of the cement floor and give a more comfortable and homelike appearance to the chapel. There are times when a bereaved family would appreciate a place to step inside and wait for a short time, and on such occasions a few easy chairs would come in very handy, and with a few rugs to arrange in one corner of the room, with perhaps a table or stand, it could be made a very comfortable spot for a few minutes rest and relaxation at a most trying time.

We should like to see some ladies clubs take up this matter and see what is needed out there and arrange and plan to have it furnished as it should be. We will gladly take any of them to the cemetery to see what is needed, and will do what we can through the columns of the Bulletin to get what is required.

Chapel: Cemetery is Much Improved 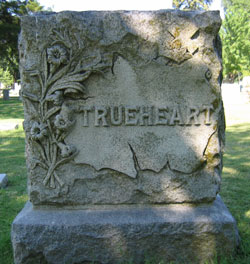 We were quite impressed with the improvement in the appearance of the cemetery. The lots are all clean, the drives are in good shape, curbings have been removed from more than 300 lots and there are only about twenty-five curbings left now in the entire cemetery. Bermuda grass has been sown in places where other grass will not grow. The spirea hedge, which bordered the extreme north boundary of the new addition to the cemetery, has been moved and now borders the north line of the present cemetery, starting at the chapel and extending to the boundary line on the east. It is all nicely trimmed and looks nice now and will be beautiful next spring and summer. The hedge roots across the road south of the cemetery have been pulled and the road leveled down which provided a good many loads of dirt which have been used to good advantage inside the cemetery. Monday, when we were out there, some of the men were working at straightening up tombstones, which were leaning, hauling dirt, and completing the work of leveling off where the hedge had been removed. Charles Anderson, the sexton, is immensely pleased with the new chapel, and with the work that he has been able to accomplish through the help of the CWA. If you have not been out there lately, we suggest that you drive out. It is not in perfect condition yet, but we do not need to be ashamed of our cemetery now and with the work so nicely started it will surely move on.

Chapter W, P.E.O. undertook the care for the chapel in large part. The Sterling High School Woodworking instructor built the wooden pews. A benevolent woman gave heavy velvet draperies. Another provided a woven runner to cover the aisle between the pews. The interior of the chapel remains much the same today, with the exception that the floor has been carpeted and a replacement pulpit was made by Ed Wellman. Helen Culbertson Johnson on behalf of the family gave the Chapel Bible, belonging to Freeman S. and Catherine Wiseman Bishop. This Bible was reclaimed recently by a descendant and replaced with one donated by a community member.

The Sterling branch of P.E.O., a philanthropic educational organization, took up the challenge for a club to do something worthwhile and has continually supported the upkeep of the chapel. Each Memorial Day members clean the chapel, provide flowers for the interior and fill the urns on the porch with plantings. Members also serve as hostesses at the chapel Saturday through Monday for those coming to the cemetery. The women of P.E.O. assist visitors at the chapel by providing a place of respite and direction to those attempting to locate graves of loved ones. The outdoor map of cemetery lots was provided by P.E.O. The roofed shelter was built under the direction of Jerry Bourgain, Charles Hayes and other friends for Memorial Day, 1991. In 1996 as part of the Raymond Rodman memorial, the concrete walks were built to the directory and chapel. The addition of plantings adjoining the chapel walk, the split-rail fence and spotlight to enhance the chapel’s outside appearance were also part of the Rodman Memorial.

For many years the active Garden Club of Sterling provided flowers and plantings around the chapel each spring and would see to their placement and care. In recent years through the cemetery beautification project, the city has provided for the planting and upkeep.

Cemetery sextons are crucial to a cemetery. Originally there were gravediggers who were called at the time of death to dig the grave. These might be men of the church community, friends of the deceased’s family or ones hired for the purpose, which later was filled by machine. In the older part of the cemetery when a machine cannot be navigated between stones, a grave must yet be dug by hand. The first mention of a sexton for Cottonwood Cemetery was the name of Frank Shelby Blades whose meticulously written records provide good documents for his 25 years of service. During that time, 1891-1916, Blades’ parents, wife and son were buried. Another service for a lengthy period of time was that of Quintein Powers. Others who served for shorter periods of time include: Uriah Nearhood, Charles Anderson, Alonzo F. Mustard, Sr., Mr. Stricklin, Homer Dyke, Leonard Nichols, Gerald Cox, Don Pitts, Lee Thompson, Gerard “Jerry” Legleiter and Sean Whiteman. Currently serving in this position is Judd McCullers.

Each sexton had particular talents, gifts and community support, which enabled him to make varied contributions to the upgrading of the cemetery. In recent years with community and city support, sextons, who were talented craftsmen, have made considerable improvements including the plating and opening of the burial grounds north of the chapel. This area has been seeded with buffalo grass and seedling trees planted. A large circle, 50 foot in diameter, has been curbed and planted. For the circle, a community group selected an angel statue produced by Yoder Concrete. Sexton Jerry Legleiter provided expertise and devoted labor to bring the cemetery once again back from the city of weeds, and the land of sandburs. The work area beneath the chapel was put in finished condition, complete with a heating/air conditioning system provided by a generous donor. Large new water lines were run to the cemetery providing many hydrants accessible in all areas to surrounding graves and to the new section North of the chapel. By Sexton Legleiter’s foresight and work, the Veteran’s Memorial Area was developed southwest of the chapel and curbings around numerous family plots were uncovered and restored. With the help of other city employees many grave markers were brought to view, having long ago been hidden by blow sand. During the 1990s the cemetery became a place of beauty and Gladstone would have been pleased with the people of Sterling! Following Legleiter, Sexton Sean Whiteman brought his own gifted skills and replaced the lumber on the north peak of the chapel and built there a lighted cross. At night the cross can be seen as one enters Sterling from the North.